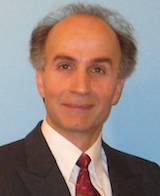 Behzad Razavi is an Iranian-American professor and researcher of electrical and electronic engineering. Noted for his research in communications circuitry, Razavi is the director of the Communication Circuits Laboratory at the University of California Los Angeles. He is a Fellow and a distinguished lecturer for the Institute of Electrical and Electronics Engineers. Among his awards, Razavi is a two-time recipient of the Beatrice Winner Award for Editorial Excellence at the 1994 and 2001 International Solid-State Circuits Conferences.

Razavi attended the Sharif University of Technology in Tehran and received a BS degree in Electrical Engineering in 1985. After moving to the United States, he obtained his Masters and PhD degrees from Stanford University in 1988 and 1992, respectively. Razavi initially worked as an engineer for AT&T Bell Laboratories and was an adjunct professor at Princeton University from 1992 to 1994. He returned to California in 1995 to work at Hewlett-Packard while an adjunct professor at Stanford University. In 1996 he became an Associate Professor and subsequently full Professor of electrical engineering at the University of California Los Angeles. Razavi specializes in telecommunications circuitry and his research involves work with data receivers, frequency synthesizers, and phase-locking and clock recovery for high-speed data communications.

From 1993 to 2002, Razavi served on the Technical Program Committees of the International Solid-State Circuits Conference (ISSCC), as well as for the Symposium on VLSI Circuits from 1998 to 2002. He has also worked as an editor for professional journals including the IEEE Journal of Solid-State Circuits, IEEE Transactions on Circuits and Systems I, and the International Journal of High Speed Electronics. Razavi was acknowledged with a fellowship in the Institute of Electrical and Electronics Engineers (IEEE) in 2003 “for contributions to high-speed communication circuits”.[1] He is a distinguished lecturer for the IEEE.

He is the author/editor of seven books and is recognized as one of the top 10 authors in the 50-year history of ISSCC.

Professor Razavi has suggested books in the following categories: