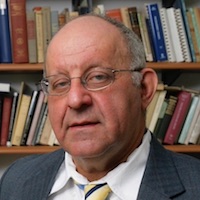 Professor Shlomo Shamai (Shitz) is a distinguished professor at the Department of Electrical engineering at the Technion − Israel Institute of Technology. Professor Shamai is an information theorist and winner of the 2011 Shannon Award.

During 1975-1985 he was with the Israeli Communications Research Labs. Since 1986 he is with the Department of Electrical Engineering at the Technion—Israel Institute of Technology, where he is now the William Fondiller Professor of Telecommunications.

His research areas cover a wide spectrum of topics in information theory and statistical communications.

Prof. Shamai is an IEEE Fellow and a member of the International Union of Radio Science (URSI).

He is also the recipient of the 1985 Alon Grant for distinguished young scientists and the 2000 Technion Henry Taub Prize for Excellence in Research. He has served as Associate Editor for the Shannon Theory of the IEEE Transactions on Information Theory, and has also served on the Board of Governors of the Information Theory Society.

Professor Shamai has suggested books in the following categories: