“We know the past but cannot control it. We control the future but cannot know it.”
– Claude Shannon

But in our case we even don’t know the past completely! It is always interesting to know what books, a genius like Claude Shannon used to read and keep on his personal library. For us the story began when we saw this photo of Shannon: 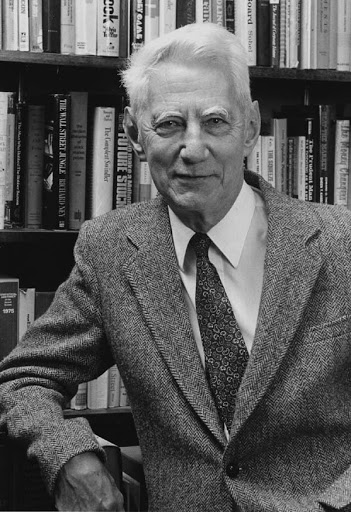 We got very curious to find out what are the titles of books on his background library. So the first step we took was to search for a high-quality version of the photo. And then we tried to zoom in and see what are those books 😀. In doing so we had a little bit of success and could find the title of a few books. It is very interesting to report all the books that we could decode their titles were in the field of … can you guess? It was in the stock market and investing. After some search, we found out that in fact Shannon got very interested in the stock market and did a lot of work in that area.

The next step for us was to do a lot of Google search to see if we could find any article or report about Shannon’s personal library. But strangely we could not find anything! We thought every detail of life a giant like him has been studied and recorded. But at least the list of books on his personal library has not been recorded and published, at least we have not been able to find any trace of it.

Next step was to try to find if anyone who has been somehow related to him or his work would know anything about Shannon’s personal library. In our search we found some clues. On clue was that two authors have done a fantastic job writing a biography about Claude Shannon. Here is their book: 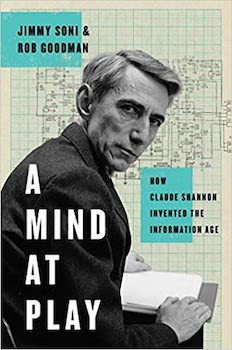 A Mind at Play: How Claude Shannon Invented the Information Age

The biography was written by Jimmy Soni and Rob Goodman, and published by Simon & Schuster in 2017. n an interview with the IEEE, Soni explained that part of the reason he wrote A Mind at Play was that he was drawn to Shannon’s personality and wanted to read a biography about him, but “it turned out there wasn’t one.”

Here is the synopsis of the book: Shannon was born in Petoskey, Michigan in 1916 and grew up in Gaylord, Michigan. He is well known for founding digital circuit design theory in 1937, when—as a 21-year-old master’s degree student at MIT—he wrote his thesis demonstrating that electrical applications of Boolean algebra could construct any logical numerical relationship. In 1948, Shannon published his most influential work, A Mathematical Theory of Communication, in which he is considered to have founded the field of information theory and paved the way for the feasibility of mobile phones, the development of the Internet, and many other technological applications. A Mind at Play chronicles these events in Shannon’s life as well as his interactions with his peers at the time including Albert Einstein, Alan Turing, Vannevar Bush, John von Neumann, Kurt Gödel, Leonard Kleinrock, Irwin M. Jacobs, Lawrence Roberts, Thomas Kailath, Steve Jobs and others.

Outside of Shannon’s professional life, he was interested in juggling, unicycling, and chess. He also invented many devices, including a Roman numeral computer called THROBAC, juggling machines, and a flame-throwing trumpet. He is also considered the co-inventor of the first wearable computer along with Edward O. Thorp. The device was used to improve the odds when playing roulette.

So we contacted Mr. Soni but have not heard back from him. Perhaps we should also contact Mr. Goodman and try to contact Mr. Soni again to see if they have any photo or video that shows Shannon’s personal library.

We also contacted Dr. Peter Winzer of Nokia Bell Labs. Why did we contact him? Because luckily we had contacted him before to get some book recommendations (he is on the list of experts on Dorado List). As Claude Shannon used to work at Bell Labs, we thought maybe Dr. Winzer can introduce us to people who knew him or his family. With his help we were able to contact a number of people at Nokia Bell Labs, one of them was Mr. Ed Eckert who is the official Bell Labs archivist. Mr. Eckert was very kind and helped us a lot by looking at what they had on the archives, but unfortunately, there was nothing related to the books that Shannon owned. During all this research we found that Nokia Bell Labs has a very interesting website that has a lot of good historical information about Claude Shannon. Here is a link to that website.

We also tried to get in touch with Claude Shannon’s family and friends or collegues, but so far we have not been able to do so. We are going to continue this effort, as we think if it can uncover the list of books that Claude Shannon owned, it could be not only very interesting but also instructional. But for now we will publish a list that we have been able to extract from the photo we showed you above. Here is the list:

We hope you enjoy seeing what our beloved Claude Shannon used to read and keep in his personal library. Of course, if you know of any reference, photo, or video that shows what other books he had on his personal library, please drop us a line to [email protected] Also if you know any member of Claude Shannon’s family or friends we would like to hear from you so we get in touch with them and see if we can make this list more complete.