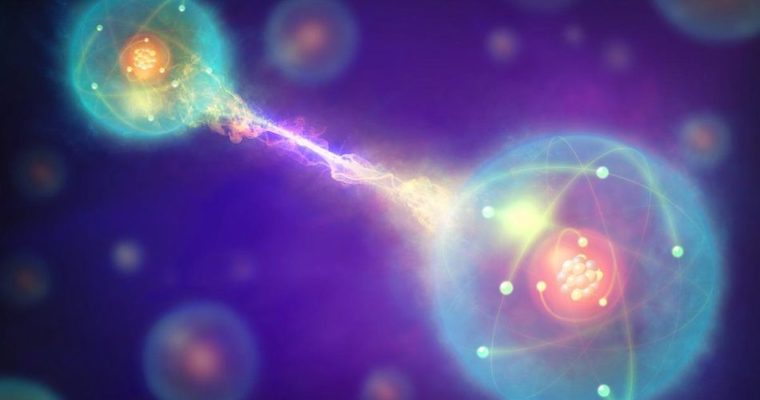 For the first time scientists from the University of Bristol, in collaboration with the Technical University of Denmark have achieved quantum teleportation between two computer chips. In this work scientists were able to send information from one chip to another without any physical or electronical connections.

“We were able to demonstrate a high-quality entanglement link across two chips in the lab, where photons on either chip share a single quantum state,” says Dan Llewellyn, co-author of the study. “Each chip was then fully programmed to perform a range of demonstrations which utilize the entanglement. The flagship demonstration was a two-chip teleportation experiment, whereby the individual quantum state of a particle is transmitted across the two chips after a quantum measurement is performed. This measurement utilizes the strange behavior of quantum physics, which simultaneously collapses the entanglement link and transfers the particle state to another particle already on the receiver chip.”

The team reported a teleportation success rate of 91 percent, and managed to perform some other functions that will be important for quantum computing. That includes entanglement swapping (where states can be passed between particles that have never directly interacted via a mediator), and entangling as many as four photons together.

Information has been teleported over much longer distances before – first across a room, then 25 km (15.5 mi), then 100 km (62 mi), and eventually over 1,200 km (746 mi) via satellite. It’s also been done between different parts of a single computer chip before, but teleporting between two different chips is a major breakthrough for quantum computing.

This work is published on December 23, 2019 as a paper in the journal Nature Physics and entitled “Chip-to-chip quantum teleportation and multi-photon entanglement in silicon” [1].